Thieves at the Dinner Table - Book by David Lewis 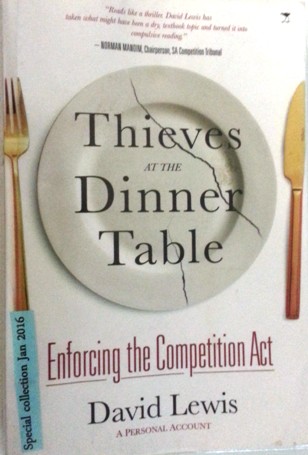 I wrote this article on 2 November 2015 on my old website. It was a review on the book, written and published in 2012 by David Lewis, executive director of Corruption Watch.

This was before the days of the Guptas, Steinhoff and State Capture etc. Greed, dishonesty and corruption is not unique to South Africa and happens regardless of race, culture, or religion.

Is it possible to run a business in an honest and ethical way where we care for our customers, our suppliers, our staff and our communities? This is a question I and I am sure many other business owners are grappling with.

When we refer to refugees, victims, squatters, the aged, the poor, the disabled, it enables us to avoid seeing people as the unique individuals they are. They are simply groups of faceless folk.

We can escape the emotions and sense of responsibility we feel about those we are close to - our parents, children, friends and relatives. The respect and love we accord those we are close to, is frequently easily discarded as we treat the rest of the world with contempt while appeasing our consciences with occasional good deeds and handouts that are hopefully tax deductible.

At home we try and teach our children to be honest, moral and good citizens. We go to church, mosque, synagogue and other religious institutions where we do our bit for the poor and suffering. We are seen to be upstanding members of society.

We go to work and the rules change. Increasingly, our principles are left behind as we exit our front doors. The business world is harsh and competitive. You either play by business rules or you are excluded. This is not unique to South Africa, it is also not a new phenomenon.

In the workplace it is survival of the most canny and those who have the connections and money. Who has the smoothest tongue, the best sales patter, the most devious deal maker? Not to mention, who has the best lawyers waiting in the wings to delay justice for many years when you are caught out.

All of the above was brought into sharp focus as I read Thieves At The Dinner Table - Enforcing the Competition Act, written by David Lewis.

David Lewis, now head of Corruption Watch in South Africa, was one of the chief architects of the new Competition Authorities which was created after 1994 and he was appointed the first head of the Competition Tribunal.

Truth, really is stranger than fiction and David gives a detailed account of how the Tribunal came to exist, how competition was handled by the previous government and what changes were made. He also explains the differences between mergers, dominance abuse and cartels and how they have destroyed lives, businesses and decent society.

The title of the book, Thieves At The Dinner Table comes from the cartel case dealing with price fixing and dividing up the country into exclusive markets in the bread, milling and baking industries. A cartel which affected the poorest folk in society the most. "Let them eat cake" came to mind as I became more and more disgusted at what was disclosed. Paltry fines were paid, lawyers got rich(er), a few executives resigned (of course they knew nothing about what their underlings were doing) and life carried on.

Other high profile cases that he talks about include the cement industry, the construction industry, Sasol, Vodacom and MTN, the fertilizer industry and the Soda Ash Cartel run by the USA and contested by Botash in Botswana. Sometimes the same people appeared before the Tribunal giving evidence or defending different cases. In South Africa the business community is relatively small and powerful directors hold many directorships across different industries.

The first member of the Cartel to confess was granted leniency and escaped prosecution and often the fines levied. It was not that they had suddenly seen the error of their ways, but rather a fear of getting caught and sent to jail. Every excuse in the book as to why they had acted as they had was trotted out and even tried to make us believe that it was for the common good.

Those short, sharp price wars we see every now and again between competitors? Don’t be fooled. It is highly likely that it is due to the Cartel leaders disciplining members who are not playing by the “rules”.

We complain that our governments are corrupt but they need the collusion of business and there is no shortage of willing collaborators.

No, not everyone in business is bad but sadly there are far too many who are arrogant and greedy.

One review described the book as a thriller. I felt increasingly physically ill as I worked my way through the book. We are morally bankrupt and I don’t see much hope of things ever changing here or anywhere else in the world.

It is time to stop living by laws that are manipulated by lawyers. Instead we need to examine ourselves and live the principles we want our children to live by. How do you look your children in the eye, knowing that you are lying and cheating at work?

We need to see the individuals we are destroying and hurting by our actions as the human beings they are, not as homogeneous masses that can be, and are treated like scum.